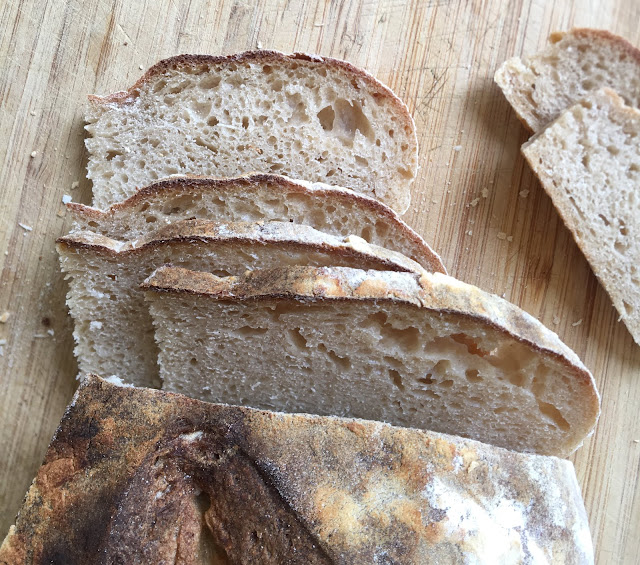 If there is anything I've learnt about cooking, it is that using easily available produce is the only way a recipe or method will get tattooed on my mind, and get used for long periods of time.

So while I'm still enamoured of the Tartine book, its focus on tradition and practical wisdom, I've started modifying proportions to fit in more of atta dough. Naturally, the proportion of water has changed too.

As for the most local of ingredients, my sourdough starter this year has been a champion - it is as vigorous and sweet smelling as a starter of dreams.  I wish I could use this strain of yeast for ever - perhaps need to let it spend longer periods in the refrigerator as the weather warms up. 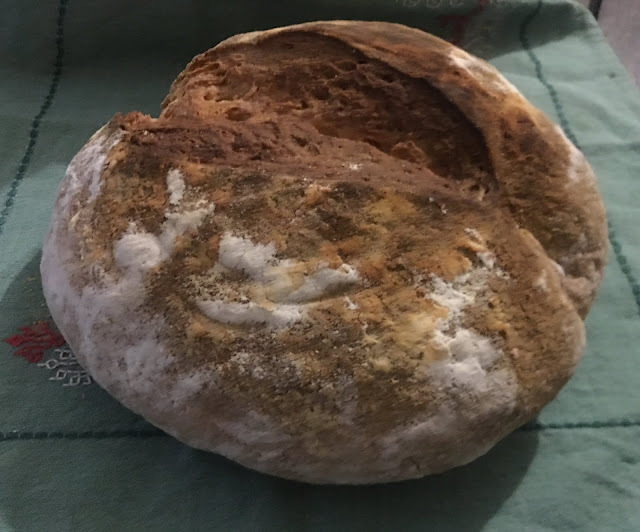 The loaf I've featured here was one of three - if there were a popularity contest in my family this week, I would have won it hands down 😉

I mixed all the ingredients of the preferment last thing at night and left it covered on the countertop overnight.
By the next morning (around 10 hours later), the mixture was bubbly and light but a spoonful dropped into water sank like a stone in a cup of water. Gave it another hour and tried again. This time, the spoonful made an effort to float for a microsecond.

I gave up on the perfect float... the mixture was beginning to smell acidic.

Mixed the dough ingredients (except salt) with the preferment and left it in a large covered bowl to rest for an hour.

Did 2 cycles of folds and turns, mixing the salt  in at this stage, and went back to other aspects of life.

Repeated folds and turns every 30 m for three hours. Had to work more gently with every repetition, as the dough was puffier and more aerated with each successive fold session.

Tipped out the dough and divided it into two halves with a scraper. Cut one half into two for two smaller loaves.

I folded each section inwards and tipped the resulting puffy square envelope over, so that the folds and seams were on the counter. I dusted my hands with flour, and used one hand to tuck the sides down below the base while the other rotated the loaf. When the 'skin' of the dough looked taut, I pulled the shape towards me a few times for safe measure. The double method seemed to work well, because the loaf retained its round shape for the next three hours, in spite of its high hydration.

I tipped all three loaves (with the seams on top) into cloth lined baskets, and left them in a warm place to proof.

Three hours later, the loaves were ready to bake. I turned each one out onto parchment paper, scored the tops and set them (one by one) into an oven preheated to 2500C. Turned the temp down to 2000C after 20 m and let the loaves bake for 20-25 more minutes. 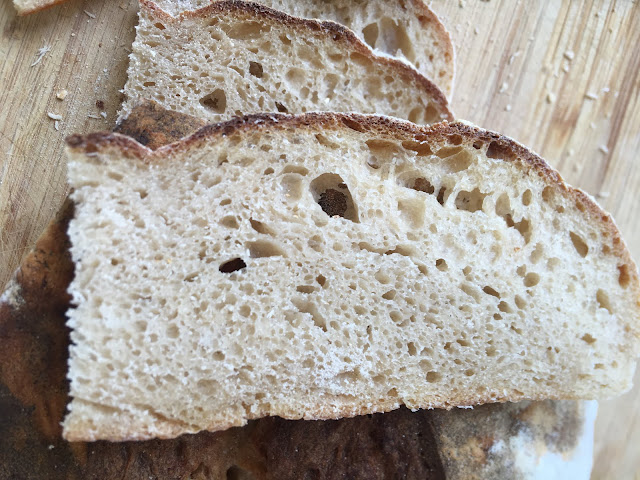