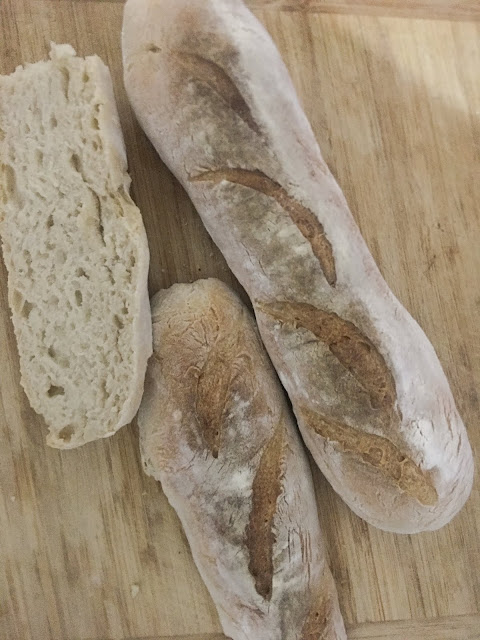 This must have been the most complicated sourdough recipe I've ever attempted - there was a levain involved, a poolish made an appearance, so did wholewheat flour and regular flour ... basically everything that comes to mind when one thinks of bread :-)

The basic recipe was that for baguettes from Chad Robinson's book titled Tartine bread (yeah I'm obsessed). But what turned out looked quite different from the long elegant loaves so loved in France. in my little oven, the longest baguette was barely 11 inches - slightly shorter than a large subway sandwich!

The fact that I got nervous and scored all the loaves timidly didn't help.  The patterns look shamefully ugly.

But what saved these loaves for me was the experience of eating it! At the end of a million steps was a bread with a crackling crust, an open crumb and a light yet distinctive taste of sourdough. 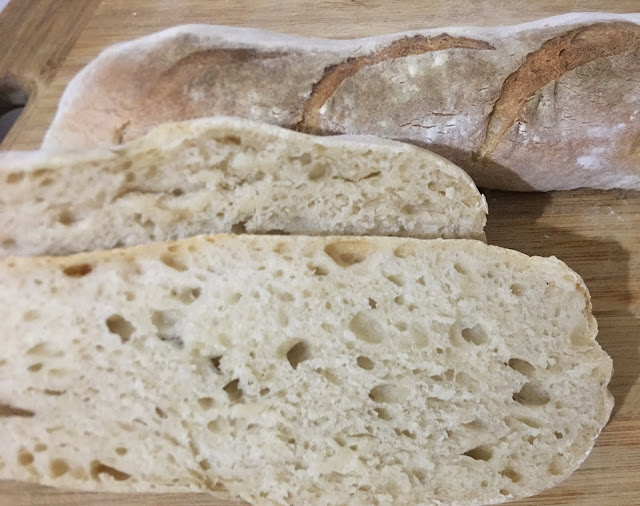 I mixed 110 g flour, 110 ml water and 20 g sourdough starter. and left it overnight in the refrigerator. A slightly bubbly batter-like levain was taken out 10 hours later and left on the counter until it fluffed up a bit more. (2 hours)

I stirred 200 g each of the levain and poolish into 250 ml of warm water. I added 325 g of flour and 175 g of atta flour to the yeasty blend and mixed everything by hand to make sure there was no dry flour left.

40 minutes later, I added 12 g of salt, and did a series of folds and turns until the salt was more or less mixed in.

For the next three hours, I repeated the fold and turn technique every thirty minutes. Towards the end, the dough was puffy.

The dough was cut into 4 sections and each piece was stretched and folded into fourths a couple of times to create tension in the skin. I stretched the resulting 'envelopes' and rolled them gently with my palms to create baguette-like shapes that were around 12 inches long. These were placed on floured cloth, with folds in between to keep the loaves separate.

I preheated the oven to 250 degrees Celsius, with a tray filled with boiling water below the rack where I would place my loaves.

Two of the loaves were scored and placed in a tray (which was also preheated in the oven) and baked. After 15 minutes, the tray with water was removed and the heat turned down to 200 degrees for 15 minutes, for the loaves to turn golden brown.

I repeated the same sequence with the remaining two loaves.