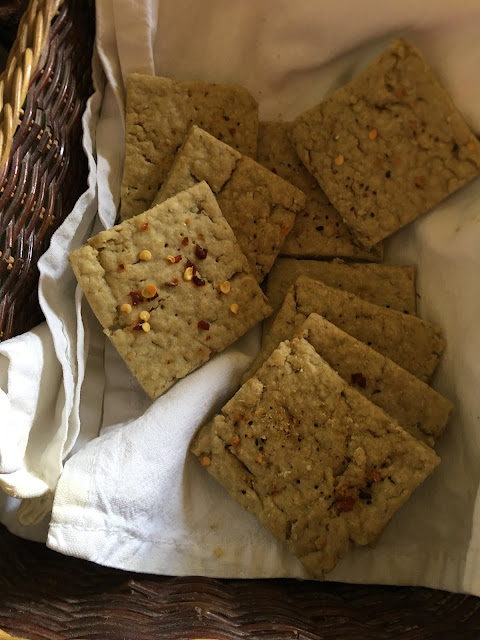 I sometimes think that pizza home delivery people believe their customers eat pizza as an appetiser and seasonings as the main course.

The last time I ordered pizza, I got at least a dozen little packs of chilli flakes and oregano seasoning. That's enough seasoning to keep a small Tuscan field occupied for a season.

And since most things I do is life is guided by the principle of 'you never know when I'll need this', I stored all those little packets in the fridge, where they joined a community of older seasoning, besides sachets of ketchup, chilli sauce, instant noodle toppings  and salt 'n' pepper that other takeaways so kindly flood us with regularly). And in the normal course of things, there they will live, unused and undisturbed, until they make their final journey to seasoning afterworld.

This week, the story changed, for four little packets. They actually got used in a cracker recipe!!!

I used a mix of grain flours, including bajra which is flooding every grocery shop hurrah!
The taste of the biscuits was satisfyingly savoury, and the seasoning added a nice edge to the taste. The biscuits taste particularly nice used as scoops for homemade dahi (yoghurt). The calorie count works out to 70 per biscuit.

Some things could have been better, which I've listed at the bottom. 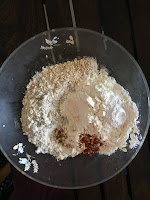 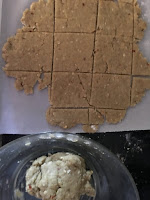 I mixed all the dry ingredients together (except 1 packet each of pizza seasoning and chilli flakes) before adding in oil and the egg.

I kneaded the mixture, adding enough milk to form a rough, stiff dough. 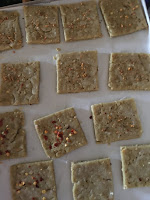 The dough was rolled out on a parchment sheet into a thin sheet half a centimetre thick, and cut into squares. (I use the term squares loosely, as you can see from the picture 😜 )

I brushed the tops of the pieces with milk to get them ready for the stars of the show *slow clap - a packet of oregano seasoning, and a packet of chilli flakes.

These were sprinkled on the crackers, while the oven reached a temperature of 160 degrees C.

I baked them for 20 minutes, switching trays halfway through, and let them cool completely before sampling.

The dough should have been rolled thinner and smoother. More milk next time and a little more effort on rolling should do it.
I could have kneaded a couple of packets of seasoning into the dough, adjusting the salt quantity accordingly. The oregano tasted quite nice with the flour mix.
I wish the biscuits had been a bit browner. Shall try raising the oven temp to 180 degrees next time.