The dark side of hummus 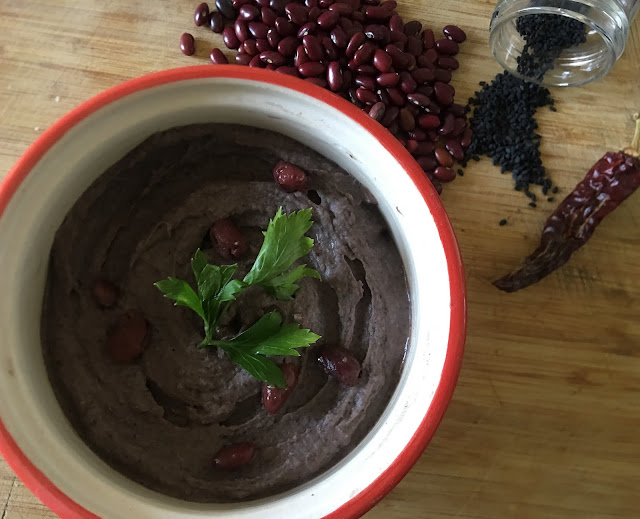 There is so much to love about hummus -  the taste, the versatility, and most significantly, the scornful way in which it says boo to every no-pain-no-gain quote ever written!

This afternoon, I had half a loaf of wheat and millet sourdough and little else when the tummy grumble monster descended on the family.

Fortunately, there was a large pan of cooked Kashmiri rajma (red kidney beans) sitting at the back of the refrigerator. It should rightfully have been simmering in a gravy of chopped onions, ginger garlic paste and garam masala, but instead, the rajma got tricked into becoming a hummus (probably a halloween hangover).

I used black or dark red ingredients to deepen the richness of the rajma's colour and before you could say pulse, there was a beautiful dip on the table.

Blitz the sesame seeds and salt in a blender until silky.
Add garlic and give it a few more whirls until the cloves break down.
Add lime juice,  rajma and enough water to get things moving in the blender.
Process until smooth.
Add chilli flakes and give the blender blades a few more turns.
Transfer to serving dish and add in the olive oil.

The hummus and bread worked beautifully with a simple salad, and no one even noticed the exhausted parsley garnish in the bowl! Hurrah love (for food anyway) is indeed blind!