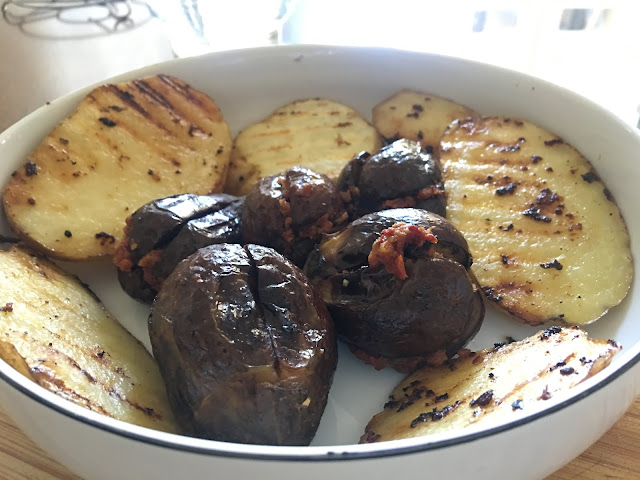 There are probably as many bharli vangi or stuffed aubergine recipes across Maharashtra and Karnataka as there are cooks. Some people add coconut to the stuffing, some others add peanuts, and I won't even get into the minefield called proportions.

This morning, I have added to the thousands of bharli vangi recipes by adding my own. I've stuck to the basic principle of making a stuffing that has sweet, hot, sour and oily ingredients, but strayed far enough from tradition to get a rap on the knuckles from purists. 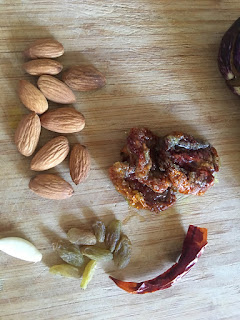 250 g aubergines (the small streaked variety that cheers up market stalls on the dreariest winter mornings)
7 raisins
10 almonds
1/2 dried chilli
3 sun-dried tomatoes (I made these myself, but won't ramble on about that now)
A clove of garlic
Salt to taste
Oil for the pan

Preparing the aubergines: I made two perpendicular cuts across the length of the aubergine, stopping short of the base.
For the stuffing: I whizzed the almonds and chilli first and then added everything else (except the aubergines and oil). A few pulses later, I had a coarse mixture that tended to get lumpy when pressed. I stuffed this into the aubergines, not worrying too much about neatness as you can see. 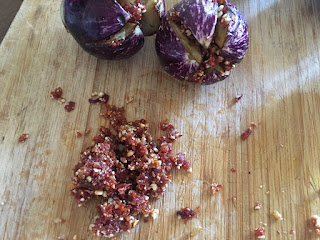 Cooking:I arranged the stuffed vangi or aubergines on an oiled grill pan and turned on the heat. After a few minutes, I added 1/4 cup of water to the pan, put the lid on, turned down the heat and let the aubergines cook. At this stage, I would have loved to put down some kind of timing, but the truth is that I kept lifting the lid and gently prodding and poking the aubergines to test for doneness. Once the biggest of them felt soft, I carefully flipped them over and let them cook uncovered, until the skins had turned glossy and brown. 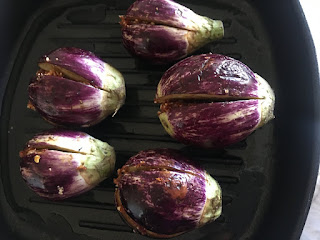 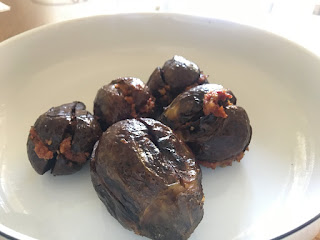 I used the oil and stuffing that had leaked out to grill a huge potato,cut into fat discs, and I was done with lunch!

I will probably make a sauce with curd, wholegrain mustard and finely chopped coriander to drizzle over the whole thing, and nod and smile when my family tells me I'm an amazing cook :-)))
Posted by Ashwini at 12:42