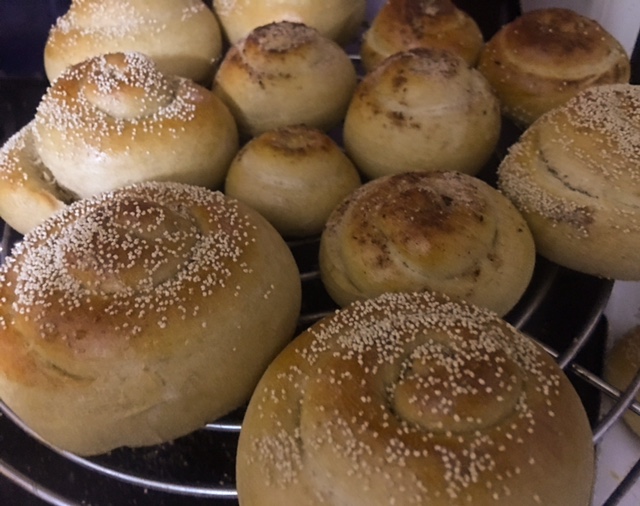 These rolls started life as an almost wholewheat challah loaf!
I had a kneaded ball of dough made up of 3 cups of wholewheat atta, 1 cup of flour, 3/16 cup of sugar, 1 tsp fresh yeast, 1 egg, 1 yolk, 2 tsp sugar and 1.25 cups of warm water rising dutifully in its battered green bowl.

My mind was on 3 strand plaits and 6 strand braids when I suddenly thought, why not an up do? Why not little buns, and while I was at it, some big ones too? 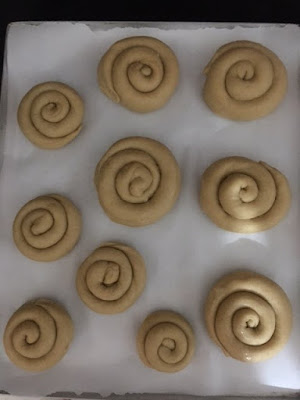 So I pinched off the doubled ball of dough into pieces. Some were huge and some tiny, but ever since I found out that diversity was a good thing, I've stopped worrying about such things :-)  I rolled each one into a long snake before coiling it up again and sealing the ends (ok some diversity there too as you can see in the picture. 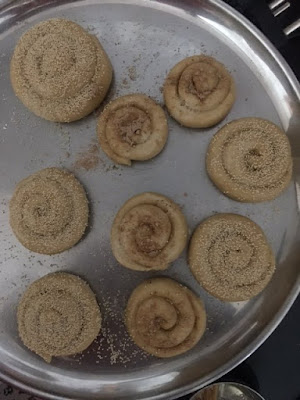 When the coils had risen a bit, i brushed them with beaten egg white (ok more like half-heartedly stirred egg white, which made it much stringier than it should have been, but i did finally get the little guys coated). I coated some of the rolls (yes, these are literally that) with poppy seeds and some with ground cinnamon, again with a frightening lack of logic and put them into the old faithful oven, preheated to 180ºC. 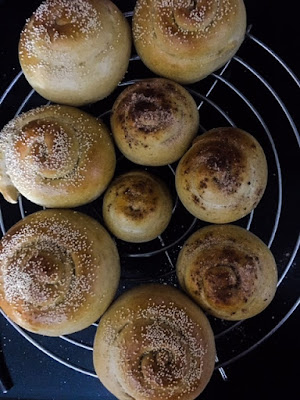 18 minutes later, I had around 20 rolls of assorted sizes, colours and toppings. The cinnamon added a special sweetness, while the poppy seeds added a grown up savoury edge.

28 minutes later, a spontaneous meeting of the neighbours happened (I think the aroma was like an invitation card).

Fortunately, I had taken a few pictures before all this, so I know I didn't dream the whole baking session up!
Posted by Ashwini at 20:14