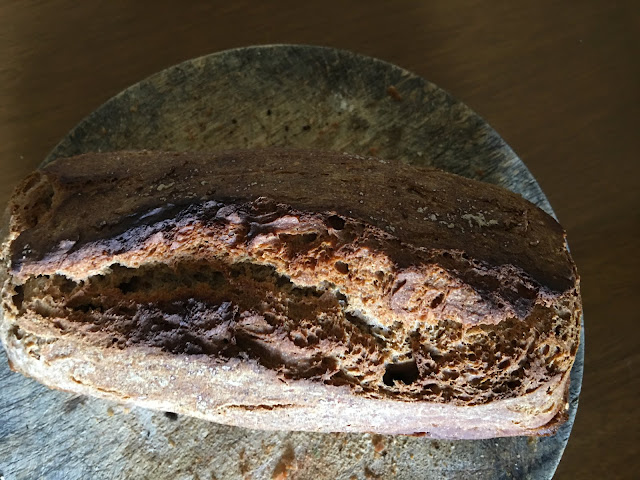 I realised late last evening that the order I had placed for Diwali sweets had disappeared into a yet undiscovered black hole. It was too late to make my own sweets, since the ingredients I needed were in shops that had closed by then.

I needed some serious comforting, and luckily, I had all the ingredients needed for the ultimate comfort food act, which is... you guessed it... bread!

So this morning, I started on a hearty rustic loaf, made with three grain flours. 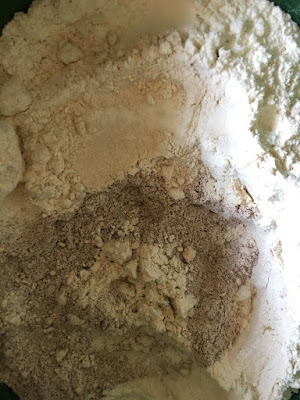 I mixed the flours and added all the other ingredients to it.

I didn't knead the unbelievably sticky and runny dough that resulted from the mixture, but instead, decided to stretch and fold it three times in the next 45 minutes.  I gave it time to rest after the third stretch and fold.

After 90 minutes, it had risen to twice its volume. I cut the dough into two with a dough scraper, and quickly shaped two loaves and stuck them into loaf tins. The whole thing was covered with cloth.

40 minutes later, the loaves were ready to go into an oven pre-heated to 220ºC.

I checked the internal temperature after 40 minutes, but it was only 196ºC, and the thermometer tip emerged gummy

Back into the oven for 10 more minutes, by which time the internal temp was 203ºC.


Yippee! My loaves were ready, and the crust was crackling. The crumb was nice and airy, although a bit too uneven for me. The ultimate judges - i.e. my family was full of praise, and I was all set for a wonderful Diwali! 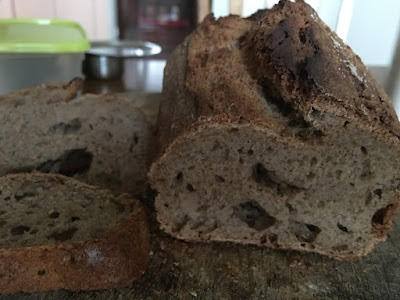