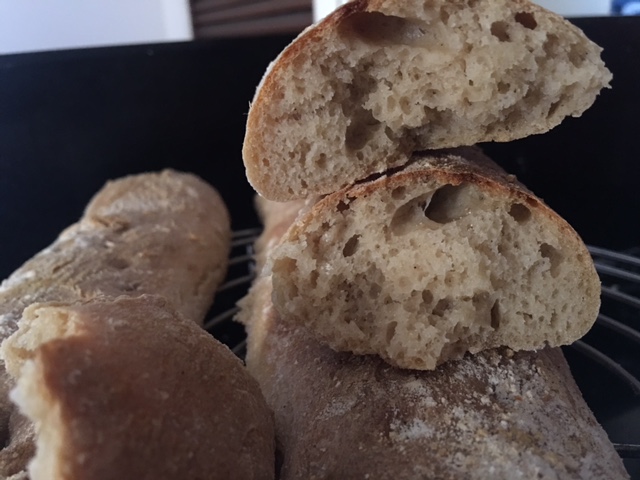 Today, I was faced with a debate more sensational than the ones we've been watching lately on TV. My sourdough starter had almost reached the top of its jar, and as I got all set to make bread, I discovered that my weighing scales had, without the slightest warning or noise, died.

So I decided to trust the memory of my eyes and hands, and bake bread anyway. Since taking silly risks is second nature to me, I took it upon myself to add a grain I don't usually bake with (that too a gluten-free one), AND to bake ciabatta, the trickiest of doughs ever.

Fortunately the gods of yeasts were in a jovial mood today, and I ended up with three loaves that are everything a good ciabatta promises. There was a crisp crust and air pockets large enough to deserve their own ozone layer.

The only sensible thing I did in the whole process was to record measurements, so I now have a recipe! 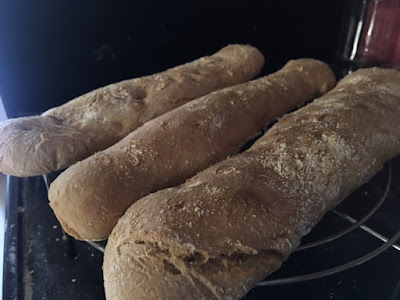 
I mixed all the ingredients until I had a dough that was tougher to handle than a 5-year old throwing a tantrum in a supermarket. I worked on a granite counter, using a hand and a dough scraper to pick up the mess, stretch it and slap it back on the counter. After about 20 repetitions, I could set the scraper down and use both hands to continue the process. At the beginning, my hands looked like those of a slightly dusty snowman, but after 10 minutes, I had a silky (although still quite runny) dough that held together. I scooped the dough up into a bowl and let it enjoy a 90 minute siesta, by the end of which it had plumped up to over twice its volume.

I put it back on the counter (now liberally floured), and cut it into three sections with the trusty scraper.

Each section was stretched into a rectangle as long as my baking tray and set on parchment. I dimpled the surface with my finger tips, sprinkled some flour on the shapes and covered them with a damp cloth for another rest. 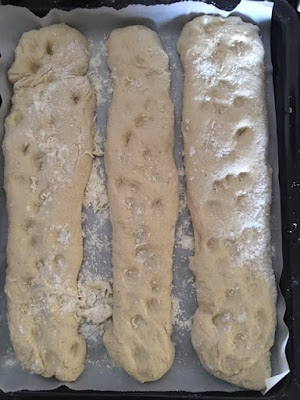 After 40 minutes, they had filled out obligingly. 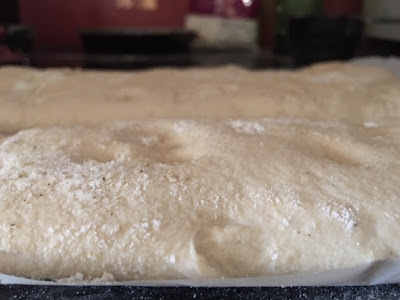 I preheated the oven and a heavy baking tray to 250•C and slid the loaves onto it (with the parchment). 25 minutes later, I had my beautiful ciabattas.

One loaf got torn and eaten by interested bystanders in the family even before it had cooled down, and I quickly clicked some pictures before the pieces vanished for ever! 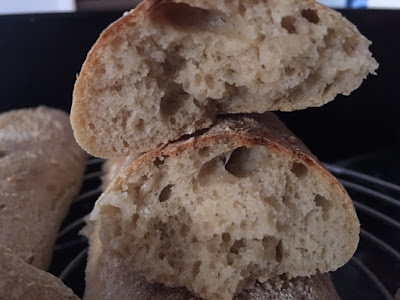