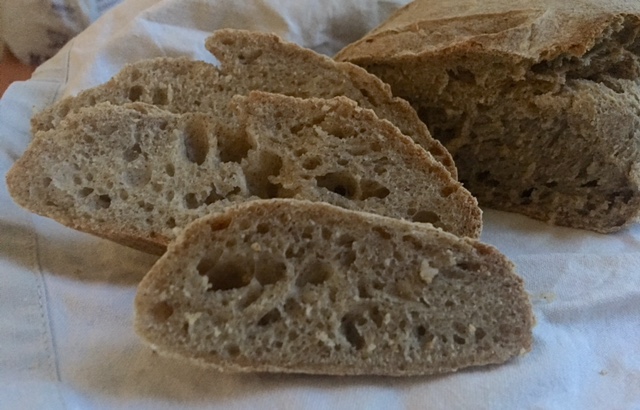 My new sourdough starter is turning out to be a glutton! It demands feeding at least thrice a day, and the attention I have to give it rivals what an infant demands. The flip side is that it yields incredibly flavourful bread in spite of short rising periods.

Meanwhile, in preparation for sourdough season, I've stocked up on all my favourite grains. Ragi (finger millet or Eleusine coracana), with its pinkish brown colour and earthy taste, features on top of the list.

I used a relatively small amount of ragi in this 3-grain bread, and the outside was disappointingly sober, an almost dull brown. But once I sliced it, a dramatically dark and airy crumb revealed itself. (The blame for the bit of gummy crumb you see in the picture goes to me -  I couldn't wait for the loaf to cool down before I cut it). 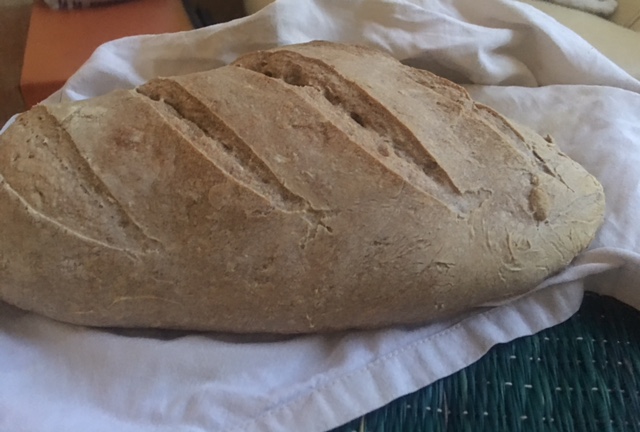 
I mixed all the flours and and salt, and added them to a bowl along with the starter. I let the mixture autolyse for 30 minutes.

In went all the water, followed by a wrestling bout with the almost slurry-like dough. After 20 minutes and a million burnt calories, I had a silky dough speckled with dark reddish brown. The quick oats seemed to have blended in. The dough temperature was 77.5 0F and the dough passed the window pane test with enviable grades.

An hour and a half later the dough had plumped up (my monster starter was hard at work :-)) and I shaped half of it into a loaf and the other half into 4 tiny boules or huge round rolls (depending on your point of view). They went into the unplugged microwave (my part-time proofing cabinet), along with a bowl of boiling water to raise the temps.

In an hour, the boules had risen slightly and were ready for the heat blast.

The loaf started the same way, in the middle shelf of an oven pre-heated to 250 0C. I turned the dial down to 180 0C and let it bake for 40 minutes. I pulled the loaf out when its internal temperature read 95.6 0C.

Tasting the bread turned out to be a very elaborate process, where almost half the bread got 'tasted'. Rescued the loaf from enthusiastic samplers and put it into a box, where it will be safe until dinner time!