How would you cook these giant beans? 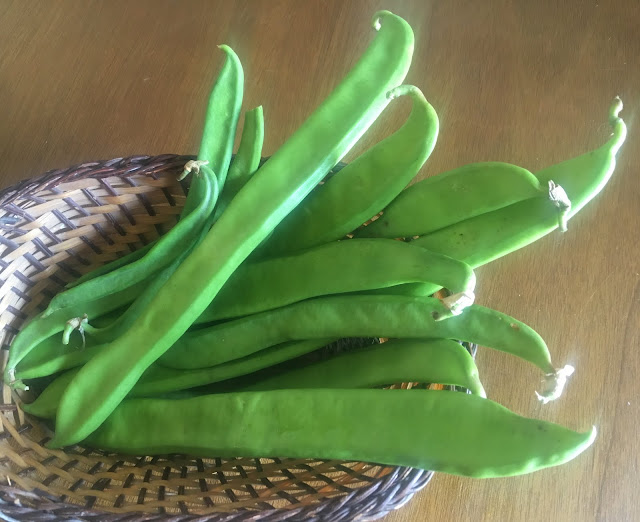 Does anyone know what these beans are called? I was mesmerised by their huge size and almost fluorescent green when I saw them at a weekend street market. They're clearly quite fresh (the flowers are still attached to them), and so thick that they look like strips of plywood. (each one weighs about 25 grams, if that's any indication).

The woman who sold them to me didn't volunteer any information. I asked someone who used to farm, and she turned up her nose at these beans, saying that they grew like weeds in her village, but no one ever ate them. I popped a piece in my mouth. Distinctly woody.

So I tried topping and tailing them and lightly steaming them.

The beans turned an unappetising grey green. The woodiness was gone, but that was the only good thing about them.

The steamed beans also had a sweetish taste to them that I can't identify, and which wasn't there before. It's a bit like a mix of very strong tea and aromatic tree bark. There's also something else in the taste that I can't put my finger on.

And everything went downhill from this point.

So I sautéed them with rehydrated dry Bombay duck (they're flooding the markets where I live), in oil seasoned with mustard seed, fenugreek and curry leaves.

I dropped in a couple of kokum fruit (Gardenia indica) to neutralise the concentrated fish flavour and cooked everything together.

Let's just say that we had a record quantity of leftovers from dinner.

Does anyone know what to do with this bean? I love that it's local and fresh, and would love to include it in my cooking, but I'm clearly doing all the wrong things with it.