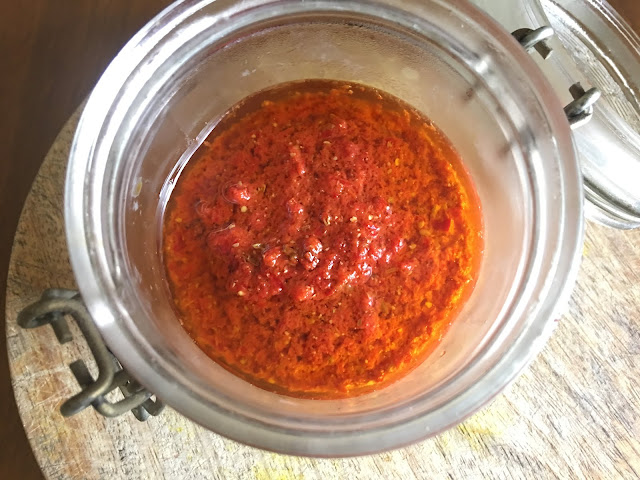 I used 250 g of ripe red chilli peppers. These are usually slit and stuffed with a mix of spices. But I was aiming for a smooth paste I could use to zest up the child-friendly meals we usually cook at home. So I ripped off the stalks, and deseeded and chopped them. I found out the hard way that I should have used gloves :(


I measured out 2 tsp of fennel seeds, 1 tsp of black mustard seeds and 1/4 tsp of ground asafoetida. 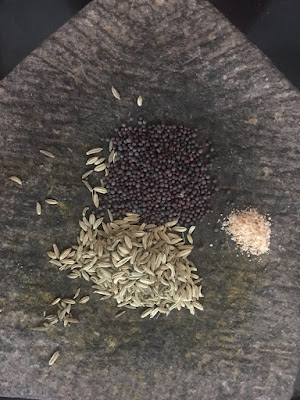 After a bicep and wrist workout on the grindstone, I had a coarse powder. Perfect for some texture! 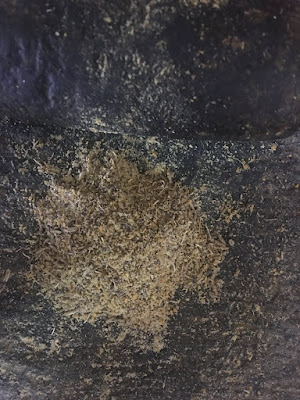 The peppers went into a blender for some punishment, until they turned into a semi-smooth paste. I would have loved to use the grindstone but I dreaded having my hands fall off with the heat.

After the hard work was done, I just added 1/2 tsp of salt, 1 tablespoon of lemon juice and half a cup of mustard oil.  I heated the mustard oil until it started smoking and then let it cool before adding it to the pickle and giving everything a good stir. 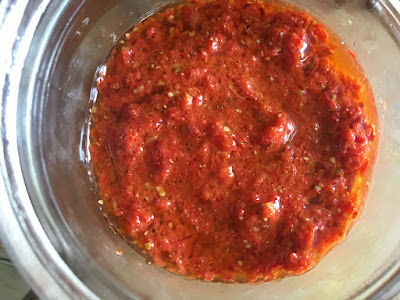 The taste: The pesto was a bit on the sour side at the beginning, but the taste settled down after a day. There are tiny pops of sweetness from the fennel that break out in the midst of all that heat, and the mustard adds bitterness (in a good way, not in the jilted lover fashion). I personally love the taste of mustard oil, but if I were to make this as a super hot pasta sauce, I would use sunflower oil (not olive oil - I suspect it might not be good friends with fennel).

Learning: I didn't sterilise the jar since I thought I would finish the pickle before you could say bacteria, but I overestimated my heat tolerance. I have used this pesto thrice in the last two days (on rice and dal, a tiny amount on toast and with a roti) and am down  a mere teaspoonful.

So the pickle now takes up a corner of a fridge shelf, where I suspect it will remain, for a long long time.