Chicken soup for the Indian soul :)


Remember the joke about the woman who accused her husband of being unpredictable? 'What do you mean you hate baked beans?' she ranted. 'You loved them on Monday, Tuesday, Wednesday and Thursday... why should Friday be different?"

Let me assure you that this joke isn't funny at all when it plays out in real life.  I had made chicken soup from scratch (recipe here) on Sunday. It was every bit as flavourful as the recipe promised, but submerging a whole chicken meant lots of water, and subsequently, lots of broth.

After two days, we were clucking with despair at the very mention of chicken soup.

It was too late to freeze the leftovers and throwing the soup out was not an option. It never is, if I can help it. So I turned to a skill that I suspect has lurks in the DNA of every Indian.

Upcycling to the rescue!!!

I borrowed ingredients and spices from pandhra rassa, the heartwarming coconut laced broth of Kolhapur, to transform the broth into a smooth soupy gravy that works well on its own, and even better with steamed rice.

The chicken and veggies in the strainer were upcycled too, but that's a story for another day. 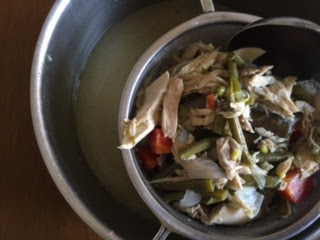 I first strained the soup to get a litre of broth.

I put the sesame seeds and cashew nuts into a blender and reduced them to a smooth paste. Half a cup of broth went into the blender to loosen up the paste from under and around the blades while life and cooking went on.

I warmed oil in a large pot and threw in the pepper and cinnamon. In a few seconds, I added the paste which had obligingly parted from the mixer blades and stirred it around for half a minute or so. 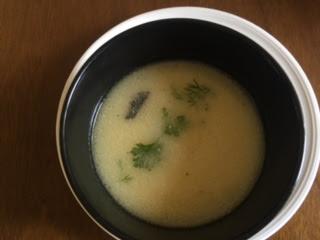 The rest of the broth went in and heated to a boil, after which I let it simmer for about 10 minutes.

Meanwhile, I reconstituted the coconut milk in a cup of broth (cooled slightly) and added it back to the simmering soup. As with most dishes that include coconut milk, it's important not to boil liquids once you add coconut milk (it doesn't affect the taste, but you get an ugly curdled texture).

I garnished the soup with coriander leaves (I did say that this was soup for the Indian soul didn't I).

PS: Skimming the fat off the broth would have made a prettier picture without microscopic oil globules. Luckily there's always a factor called 'next time'.