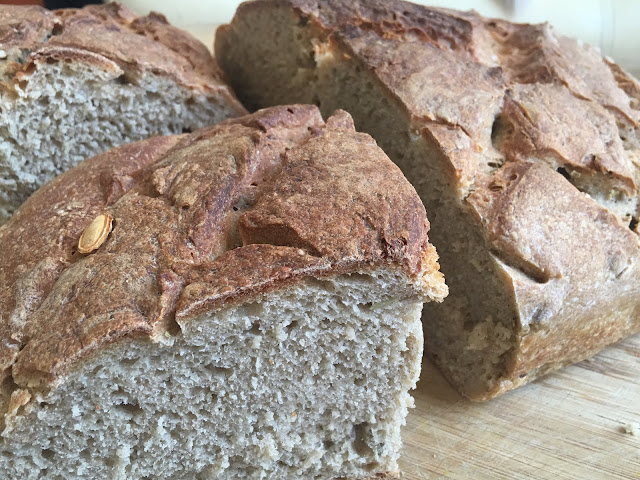 We've all heard of bread growing in size as it proves and bakes, but this one grew right at the planning stage.

Which, I guess, is another way of saying that I umm messed up :P

I was making a bread with wholewheat, ragi (finger millet) and oats, and I miscalculated the amounts by almost 20%. Luckily the yeast, weather and ingredients forgave me, and I have here, a yummy loaf that weighs almost 2 kilograms in its birthday suit!

This post won't have a recipe (head hung in shame), but I will mention some of the good things that happened. 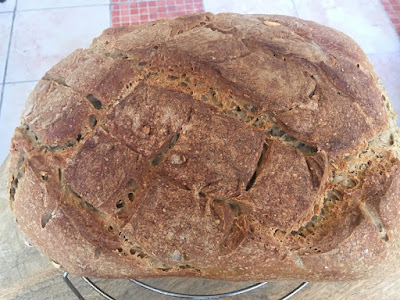 An internal temperature of 95ºC 'cooks' a dough has ragi or finger millet. Wholewheat bread loses its sticky gummy texture at 93.5 (at least the Indian chapatti flour I use does) but even a smallish content of ragi has always made it a lot more moist than I think bread should be. Shall test this a few more times before getting 95ºC tattooed on the parts of the brain that process love and bread. 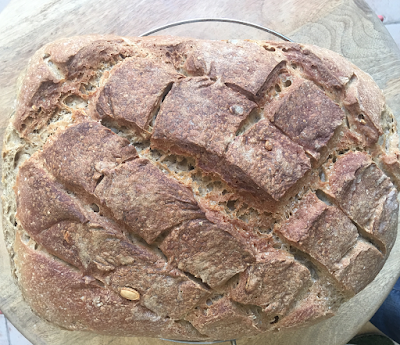 Lesson 1 in scoring a high-hydration dough. I know my loaf isn't a patch on some of the beautifully scored loaves we see, but I think I might have stumbled on a cheat's method. The trick with high-hydration dough is to score really deep, when the dough is cold.  I had done my second proof in the refrigerator, and the dough was as obedient as a dog who has seen a treat. I wish I had done a neater job and used some seeds to heighten the contrast.

Eggs poached in tomato and carrot soup will welcome the new loaf to the dining table today. Have a great evening people!