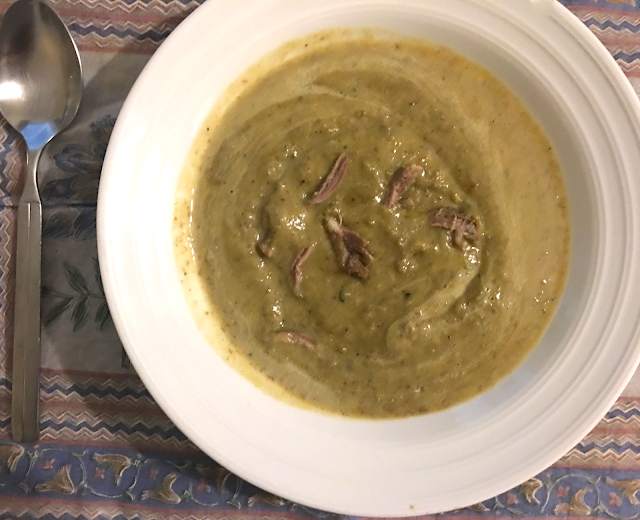 I raided the fridge to look for ideas for a soup to go with my sourdough yesterday, but everything seemed to be in the wrong size!

I had a pumpkin that weighed 250 g (yes the whole vegetable). My greengrocer tells me it's called a disco pumpkin.

There was a lemon that was larger than a pomegranate.

And a tray of pork belly that, for some reason, the butcher had cut into tiny cubes. (online shopping. humph!)

All these crazies came together to make a creamy, nourishing soup, with the support of some lentils and yoghurt!


250 g of pumpkin, peeled and cubed
1/2 cup of dried lentils, washed
100 g of pork belly
1 tsp oil
The zest of a lemon (I used less than a quarter of the huge lemon)
Salt and pepper to taste
1/4 cup of yoghurt, beaten until smooth with 1/4 cup of water


I sautéed the cubed pumpkin along with pork belly for a couple of minutes.

I added lentils,  3/4 litres of water, lemon zest and seasoning.

I brought the water to a boil on a scary high flame, after which I turned down the heat and let the liquid simmer.

In about 45 minutes, the lentils had cooked, the pumpkin was mushy and the pork registered an internal temperature of 78ºC.

I let the mixture cool slightly and removed the pork belly pieces. The rest was pulverised in a blender.  The puree now had the consistency of pancake batter. I also shredded the meaty bits of the pork belly and set it aside.

I stirred thinned yoghurt into the reheated puree and sprinkled in shredded pork.  The puree was ready for scooping up with hunks of sourdough!