It's funny how sometimes, bland ingredients can come together to spark off meal ideas that are anything but bland.

I had two meaty chicken legs and a stack of sliced coccinia that were competing fiercely for the gold in a world blandness tournament.

A piquant marinade and a blast of cooking later, they were new animals (vegetables and birds, to be precise)!

And I had a marinade recipe that I want to bottle and bury for future generations :) 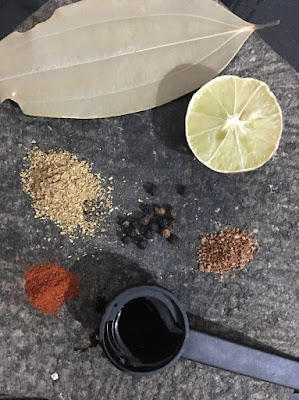 Mix the ingredients in the marinade section. 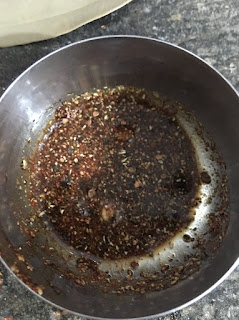 Rub marinade into the flesh of the legs, taking care not to let the spices get on to the skin. Cover again with the skin.

Dry the skin with paper towels and sprinkle salt on it. Lay on a roasting tin. 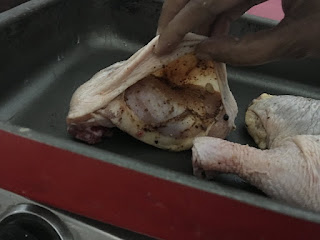 Sprinkle vegetables around the chicken. 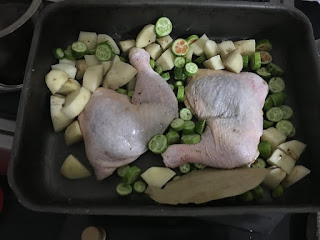 Roast at 180ºc for 35 minutes or until the internal temperature of the chicken registers 180ºF (that's what this paranoid cook does anyway). Stir the vegetables around to coat them with meat juices a couple of times during the cooking process.

The truth about the toes of a gentleman

As though coming to terms with a vegetable called lady's finger weren't hard enough, I discovered one named gentleman's toes.

In spite of its bile-stimulating nomenclature, this miniature gourd turned out to be an old familiar. Also known as Coccinia or tondli (and half a dozen other names), this little vegetable grows on vines and proliferates with almost indecent efficiency.

When cooked, coccinia willingly picks up flavours like other gourds, but unlike its mushy cousins, it turns crunchy almost at the very mention of fat.