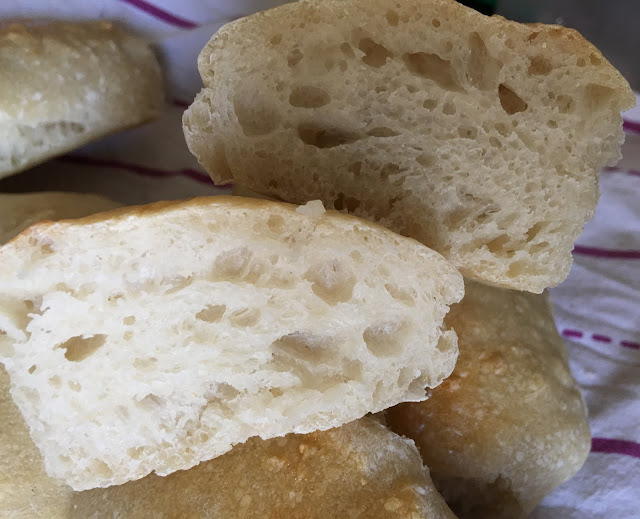 I am not really sure why bread is called the staff of life, but it certainly makes a good analogy for life.

Most of the things that go into making a fulfilling loaf of bread come free (especially if you filch the little packets of salt from airlines and hotels).  And the most important (and rare) ingredient is time. If you have enough time, you can let your ingredients grow to their full potential, and a lot of negative things just fade away and disappear.

But as in life, we often want to speed things up while baking bread. So we spend more money and add more ingredients, complicating a recipe that just asked for the basics. And we end up with results that may look the same superficially, but which lack both flavour and depth.

Now for some hard facts.

When I proofed the rolls I started last night for 16 hours, it wasn't because of all the stuff above.

It was because I had 1/4th of a teaspoon of fresh yeast left and it was too late to run to the shops!

I kneaded the dough, put it away in the refrigerator and crossed my fingers. (Did I mention that another vital ingredient in bread making is prayer?) 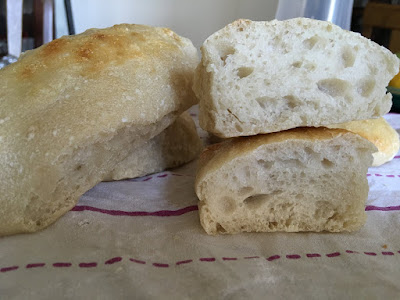 
I mixed all the ingredients (except salt) in a big bowl and kneaded using a slap and fold technique for about 15 minutes. For the first 10 minutes, the dough was woefully slack,  but after a few more minutes of kneading, it was holding its form and behaving almost as well as a good child when fast asleep.

I added salt at this stage, working the dough a little more until it was mixed in.

The dough was packed off to the refrigerator for a long rest in the same bowl (covered).

16 hours later, the little ball had doubled. I tried out a variation on the shaping process by patting out the dough and folding it over itself 6-8 times.

I flattened the folded dough into a rough rectangle and cut it into 8 pieces with a bench scraper.

All the rectangles were placed quite close to one another on a baking tray lined with parchment paper.  The dough was so slack that some of them stretched and lengthened, while others stayed intact. I put the tray into a cold oven for their second rising.

Two hours later, the dough had grown, both vertically and horizontally. I brushed the tops with beaten egg white, and set the whole tray into the oven, preheated to 180ºC.

20 minutes later, the house was smelling like heaven, the rolls were ready to pull apart, and life was good! 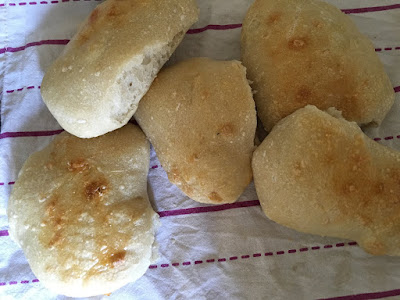