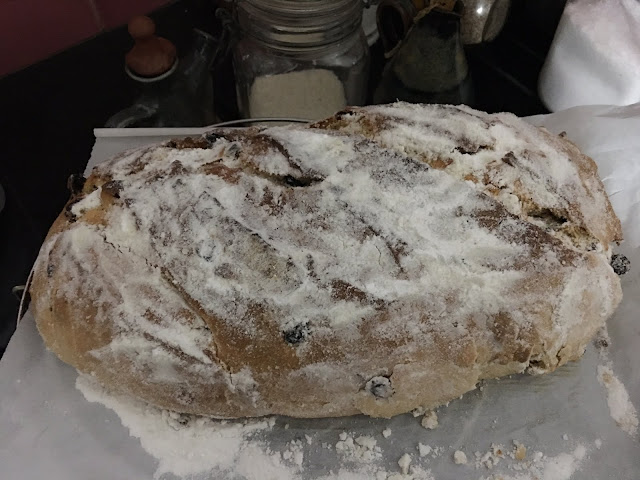 Last night, I had a bad case of pre-stollen nerves. What if the recipe I had been planning to use was the wrong one? What if my yeast didn't rise at all? What if all the work I had put in in the last few days was wasted? I even considered renaming my creation a new year stollen, and at a particularly weak moment, a valentine's day stollen.

I frantically searched for other recipes, and ended up even more confused. There were spices ranging from cardamom to cloves to vanilla; methods that had a preferment and other quicker ones... until better sense prevailed, and I decided to follow the basic recipe given here, with changes in the spices added (so that it matched the stollen I had eaten over the years) and to improvise on the method.

I let the yeast bubble in 3 tsp milk and a tsp of sugar for about 10 minutes.


While that was happening, a very helpful little assistant was peeling cardamom pods. 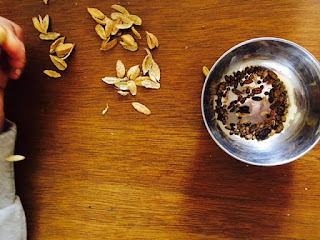 I ground them on a traditional grinding stone. 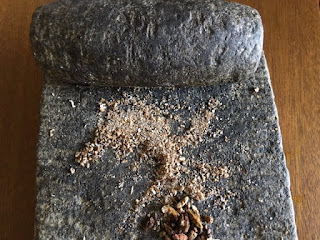 The cardamom powder went into the flour along with sugar and butter. I then added the yeasty liquid and milk and got to work, kneading the mixture into a soft dough. 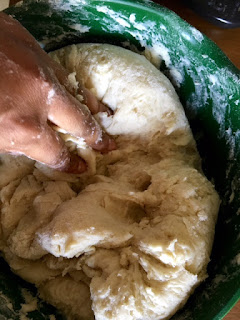 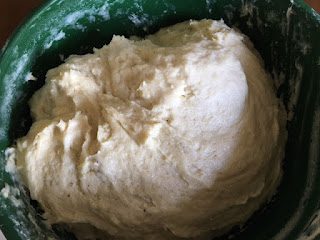 Three hours later, the dough had doubled in volume.

At this stage, I worked in the fruit and peel, as well as the rum I had reserved. I cut the ball of dough into two and rolled one of them into a rectangle on a lightly floured surface.

I rolled half the marzipan into a long rope (as long as the rough rectangle of dough) and placed it in the centre of the rectangle. 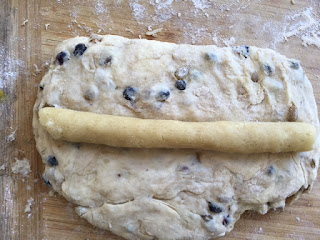 I rolled the ends of the dough over the marzipan rope to enclose it completely. As you can see, the dough was still quite sticky. 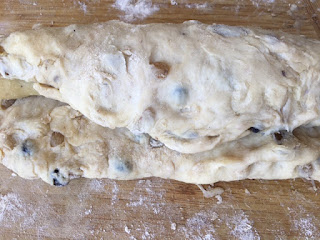 The loaf was placed on a baking tray lined with parchment paper, and I repeated the same steps to make the second loaf. 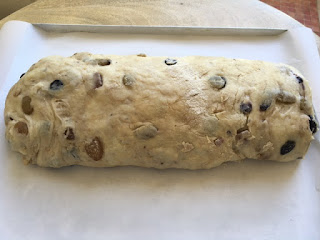 Two hours later, the first of the loaves had risen and it went into an oven preheated to 180ºC.  In 40 minutes, the top was brown and the bottom sounded hollow.

Out it came, for a thorough brushing with melted butter  and a roll in powdered sugar. 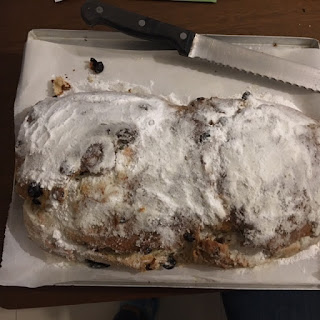 I cheated and cut a slice or two out of the first loaf while it was still warm. The crumb was still damp and the marzipan had gone hopelessly off-centre. I know that the crumb will heal once the bread has a chance to cool and rest. 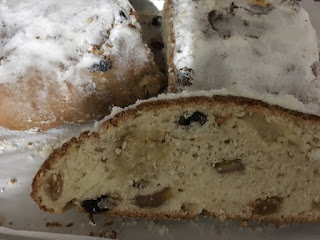 As for the taste... let's just say that the season's cheer has come in early :)