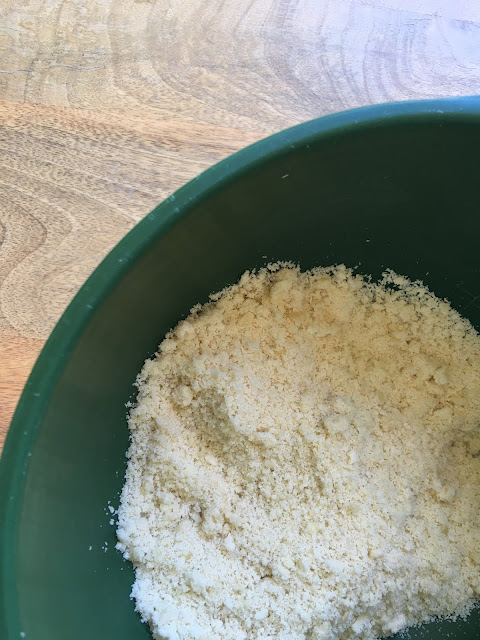 With my candied peel and rum-soaked raisins ready and waiting, I started today on the last of the ingredients that will go into my stollen.

How tricky could it get, even if I complicated things by making the almond flour and switching egg whites with a vegetarian substitute?

It could be plenty tricky, I realised.

Here are the lessons I have filed away for that great forgiving institution called 'next time'.

The blanched almonds must be super-dry
If you've blanched almonds at home (and there's no reason not to, the process is quick; and it's fun to make the nuts literally jump out of their skins), don't get fooled by a dry surface a couple of hours later. Soggy insides make for a coarse yet pasty almond flour and a chunky marzipan.

Does anyone have a fool-proof test to test if the almonds are dry inside out?

Almonds get pulverised easily, after which they start turning into butter and immobilising mixer blades. So when you try to grind sugar and almonds together, much of the sugar remains granular by the time the almonds have clogged up movement in the mixer.

Next time, I will grind the two separately, and then mix them by hand.

A vegetarian substitute for egg whites is concentrated sugar syrup

I did this because
a) I was squeamish about tasting something with raw egg whites in it and
b) because I had lots of concentrated flavoured syrup left over from my candied sweet lime peel experiment, and I am too cheap to throw it out.

But it was a good short cut! The bitter-sweet flavour of sweet lime makes a nice complement to the taste of almonds. I didn't measure out the syrup - just kept adding it in small increments until I could knead the dry powders into a nice dough.