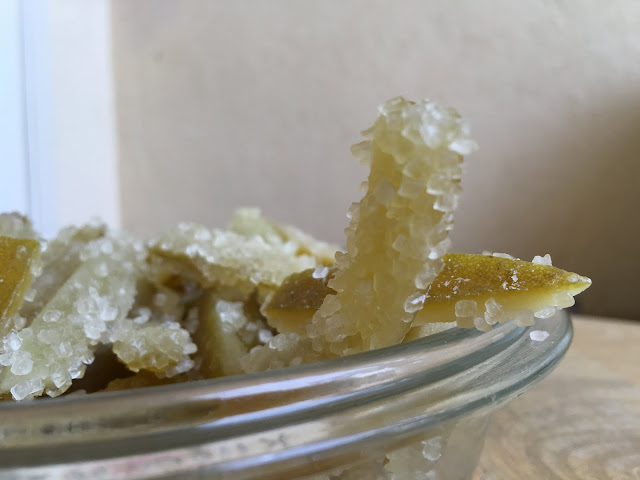 After years of being smitten by stollen that comes in tins from halfway across the world, I thought I'd make one at home this year for Christmas.

And just when I had found a (reasonably) easy recipe, I shot myself in the foot by deciding to first make the ingredients that go into this traditional cake-like bread (or is it bread-like cake? Either way it's delicious). And to complicate matters further, I decided to use as many local ingredients as possible.

This additional step means that I won't be able to wrap and store the stollen for a week before slicing it, but making the ingredients should be fun!  The candied peel certainly was, and although the end product was a little more bitter than I would have ideally liked, the family did a hearty sampling that left just enough for the stollen. 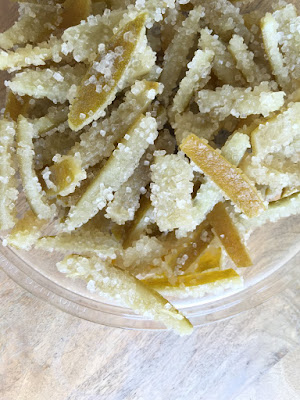 Mosambi, sweet lime or Citrus limetta is a native South Asian fruit that's as hard to peel as an orange, and as sweet as a tangerine. The mosambi available in the market yesterday were as green as limes, but after a few minutes of cooking, they kindly turned a pale orange.

I cut mosambi into quarters and prised the flesh out with a knife. Each quarter was cut into 1/2 inch strips.

I boiled a large pan of water and tossed the peels in. After 15 minutes of cooking, I drained out the waster and gave the peels a couple of thorough rinses.

I boiled the 2 cups of water with 2 cups of sugar  in the same saucepan and dropped the peels in.
These were simmered for an hour, by which time they had become very soft.

I scattered the remaining 1/2 cup of sugar on a baking tray and tossed the peels around in the sugar until they were well coated.

Finally, I laid out the peels on two baking trays and left them in a cold oven to dry.

24 hours later, I had my own candied peel. 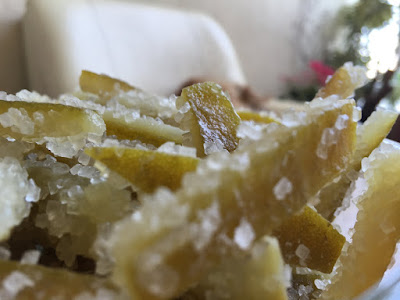 Note to self: The peels were a little more bitter than I would have liked them to be. Scraping the pith off might work better.

Coming up: Day 2 - getting candied peel and raisins drunk on rum