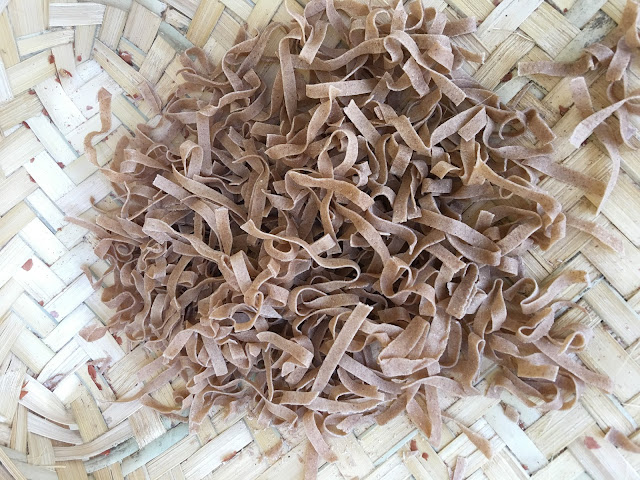 Ragi (finger millet) and wheat seem to be made for each other.

Each grain brings its own special qualities to the table, oops terrible pun that. Wheat adds elasticity to the dough, making it easier to work with, while ragi brings its trademark colour and a hint of malty sweetness.

After a weekend spent baking bread with this combo, I thought I'd try out something new.

And presto, the ragi-wholewheat tagliatelle was born.

The dough was pleasingly docile while it was rolled out and cut, but once it had had a brief dip in boiling water, its strength started showing up. 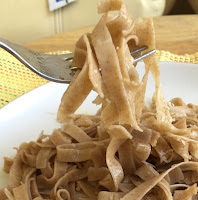 It was strong enough to team up with a traditional ragu last night, and flavourful enough to be able to take a spartan olio-e-aglio treatment today.


Knead all the ingredients together until homogenous and smooth. Cover the bowl and let the dough rest for 15 - 30 minutes.

The dough may look too slack at the beginning, but it does firm up after its rest :)

I used a pasta maker to roll out and cut the tagliatelle you see in the picture, but one could roll out the dough thinly and cut it into strips with a pizza cutter. A lot of cookbooks advocate rolling up the sheets and cutting them, but I usually end up with zig zagging tagliatelle when I do that. Zipping across the sheets works better for me.

To cook, toss small handfuls into lightly salted boiling water and remove after 45 seconds to a minute. 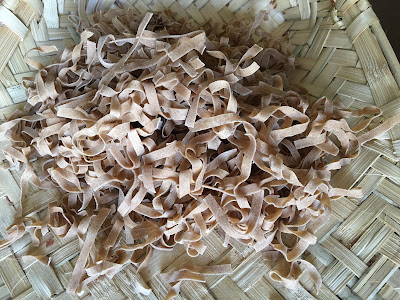 
After cooking what I needed of the pasta last night, I let the rest dry until it was stiff and brittle.
I stored it in a large roomy tub in the refrigerator until it was needed today.
Posted by Ashwini at 14:35