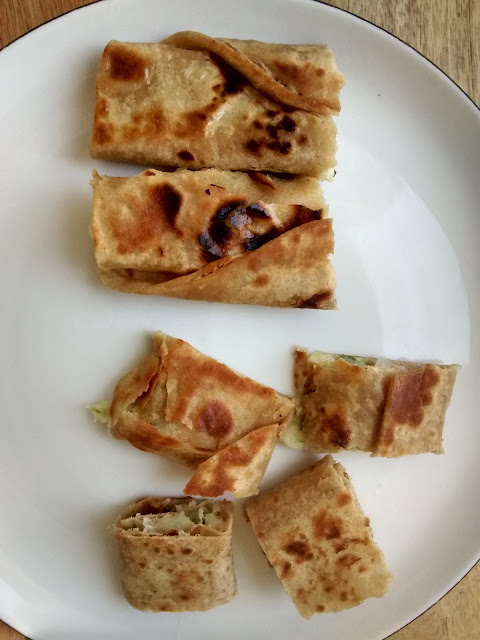 Decades before anyone in my family had even heard of spring rolls and burritos, my mother used to make something that she called Poli Che Rolls.

These rolls had layers of thin crisp skin that used to crackle when we bit into a roll. The fillings varied according to the season  - but what was common was that on days when we had Poli Che Rolls, there was never any argument at the dining table about finishing everything on one's plate.

Interestingly, my mom's innovation had nothing to do with the love of cooking.

It was the opposite, actually - she has never enjoyed cooking.

So  when these rolls wrapped up (pun unintended) everything that she wanted to feed her kids in a single fuss-free step, it was a win-win situation.

Now that I am a mother, I find myself following the principles I imbibed from my mother's cooking (even though I love cooking myself).

The first is that if you make a meal fun to eat, your kid won't even notice that she's eating the stuff she claims to dislike (or hate forever as some 7 year olds are fond of saying). The second principle is that letting go of your traditional food forms doesn't mean abandoning your culture. It's ok for food to evolve, even though it's different from what our grandmothers made.

Here are some Poli Che Rolls I made this morning. They vanished faster than I could imagine, proving that some things don't change with time :)


4 rotis/chapattis
2 medium sized potatoes, boiled and mashed
The juice of 1/4 of a lemon
A generous pinch of garam masala
3 sprigs of spring onions, chopped (leave out the bulbs and add another stalk if you don't like to smell of onions)
1/4 -1/2 cup of grated cheese (I used plain processed cheese)
Salt to taste
Finely diced green chilli (optional)


Mix all the ingredients (except the rotis) and give them a stern knead with your hands, until you end up with a nice colourful ball of filling. Divide into 4 equal sized pieces and roll into fat sausage shapes. 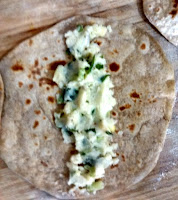 Place a roll on a roti. Flatten slightly and nudge the filling to the ends of the roti. 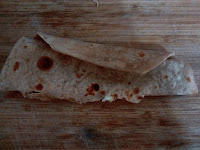 Roll the roti such that the edge is on top. You could press the roll to flatten it slightly so that it cooks evenly. 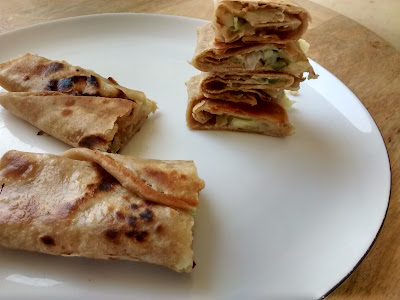 Put each roll gently on a hot greased griddle with the edge at the bottom. When you do that, the heat of the griddle seals the fold, and keeps the roll from opening on the plate.

Cook until golden brown. Turn and get some colour on the other side too.

Cut each roll into two or four pieces.