A mild-flavoured sourdough - my pride and joy :) 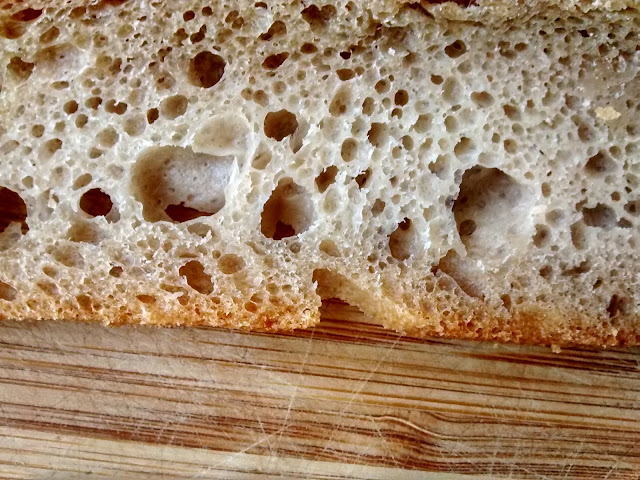 The more sourdough I bake, the more I think that starters are like children. Give them regular feeds and lots of attention, and they behave like angels (most of the time anyway).

This bread was made using a week-old starter, one that has to be fed at least thrice a day. But the bread it yields makes it worth all that extra effort.

This loaf was my first experiment with the new starter. It had:

I added all the water to the flour and let it autolyse, covered, for 2 hours (my computer has shown its disgust with a red line below autolyse and no suggestions).

I then added the starter and kneaded the slack aromatic dough by hand for about 10 minutes.  When I had two rippling biceps and dough that could be stretched thin enough to let light through, it was time to stop (not that I could have gone on anyway, with my arms practically on strike). I added the salt at this stage, and persuaded my arms to knead it in.

The dough lay balled up in its bowl and snoozed. I was ready for the usual 6-8 hours of rising time, but it took no more than 3 hours.

I worried about lack of flavour, and considered extending the second proof  by leaving the shaped loaf in the refrigerator. But curiosity about the new starter's performance took over, and in 3 hours, the loaf was in the oven at 250ºC.

In ten minutes, the oven spring was greater than I had ever achieved before. In 50 minutes, it was done.

I realised too late that I had forgotten to score the dough, and the finished loaf had cracks and tears all over.

As for taste, I needn't have worried about lack of flavour.

My next loaf will have 10 g of salt instead of 9, but other than that, we're good.

And yes, the new starter has been christened. It is called Joy.