These loaves come from my maniacal baking session last weekend (and I suspect this weekend is going to be no different).

What's interesting is that while both the loaves are formed from the same dough, they are totally different in character and taste.

In terms of the process, the dough for the baguettes was proved a couple of hours longer, and I went through two bouts of shaping. And these two factors (or one of them) resulted in two very different kinds of bread! 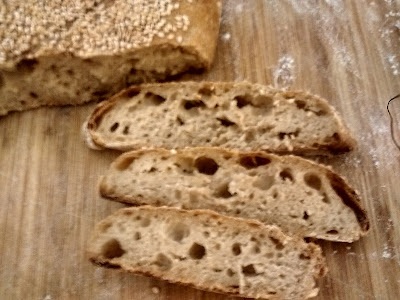 Here is the basic dough recipe.

Mix in all ingredients except salt, and give the gluten in the flour a chance to stretch for about 30 minutes.

Add salt and knead thoroughly for about 10 minutes, until the dough looks velvety. (warning: it will be sticky and slack and attracted to your fingers until it is kneaded well).  Cover and allow to rest in the refrigerator for 8-10 hours.

Take the dough out of the refrigerator, divide into two halves and shape. Shape both into batons and leave in proving baskets lined with floured cloth. 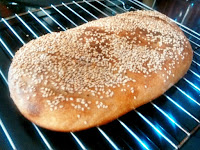 After two hours, turn one of the batons onto a floured board (or a peel if you have one), add a topping if desired and score. Place gently on a baking tray or stone in an oven preheated to 250ºC. Since the dough has a very high level of hydration, you need to be quick during these two steps.

Spray liberally with water every minute for 10 minutes. Turn down the heat to 180ºC and bake for 35 minutes until the crust is a deep brown and the bottom sounds hollow.

Tip the other baton out of the proving basket onto a liberally floured surface. Cut into two halves and shape into long thin baguettes. (I have done a lousy job of shaping, the ends should have been narrower and the whole shape a lot more elegant).

Leave for another two hours to prove. I just use a baking tray lined with a thick floured cloth that I fold up to create separation between the two baguette shapes.

The baking process is the same as for the baton, except for one difference. These beauties need just 20 minutes or so at 180ºC.