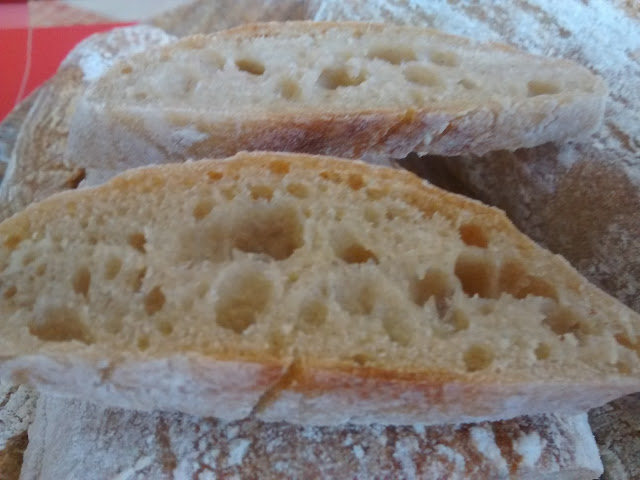 Wheat where I live, is grown to make rotis and other flat breads. Naturally, the flour is soft and malleable enough to be rolled out thinly, but not strong enough to hold the huge air pockets of a beautiful artisan bread (because it would make the rotis too chewy).

The option is to buy imported flours or to add gluten, but I think it is always better and more sustainable to work with local produce. I also like to use as much wholewheat flour as possible, which makes a tastier loaf (that's good), but also a heavier one (not so good).

High hydration definitely seemed to be a solution, but I was struggling with moist gummy breads until I saw +Tiziana Bontempi 's blog that had incredible airy breads and some methods that might just be the tonic for my flour to get stronger! She also uses a lot of wholewheat flour, which seemed like just what I needed.

So here is my first experiment, using the methods from Tiziana's blog. There are several ingredients in her recipe that are unavailable in India, but I have tried to substitute them the best way I could! 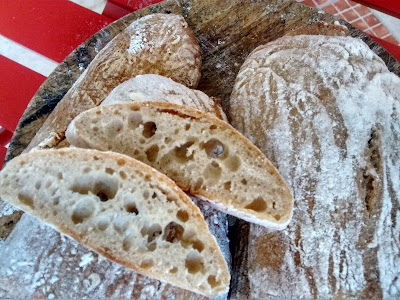 I first mixed the flours in 500 ml water. By the end of two hours, I had a slack mix that looked like a batter, but which got pulled up stringily when lifted with a spoon

I then mixed 37 ml water with yeast and sugar. After 5 minutes, I added the mixture to the dough to make up a hydration level of 90%.

The bowl was covered for bulk fermentation for 10 hours, (lifting and folding gently 4 times during that time), by which time it had almost doubled in volume.

I tipped the slack but now stronger dough onto a floured countertop, cut the dough into 6 pieces and shaped them roughly into long ciabatta-like rectangles.

Placed these beauties on thick floured cloth on baking trays, making folds between rolls to separate them and left them at room temperature for an hour.

I placed these into an oven preheated to 250ºC, and squirted a little water into the oven once. After a few minutes, they were rising like they wanted to touch the top of the oven! After 10 minutes, I lowered the heat to 180ºC and baked them for another 22 minutes.

I could barely wait for them to cool down, but the slices were worth the wait! 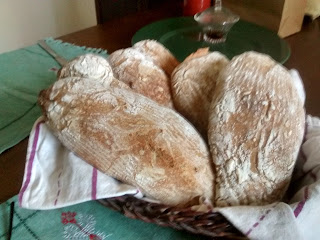 Even my biggest critic, my 8 year old daughter, approved of this experiment when she ate a slice for breakfast this morning! :)))


The crust was crackly and crisp when I took them out of the oven well after midnight, but this morning, it had turned a bit chewy. Suggestions anyone?