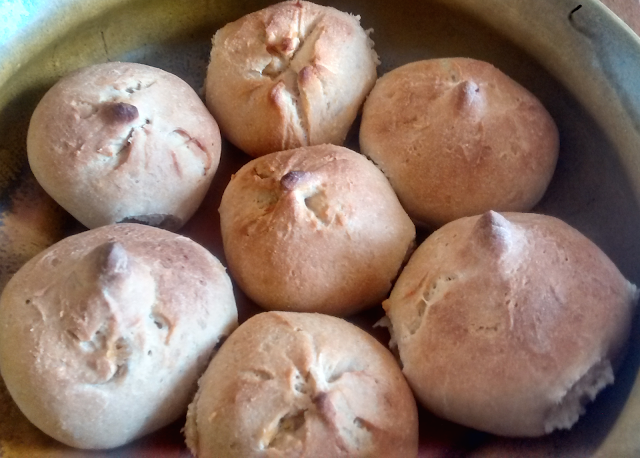 This cross between a modak, a puran poli and a roll all started with a brag :(

This year, I was determined to make at least one of the two festive season's favourites at home. But by the time I had realised how hard these things were to make, I had announced my plan to too many people to be able to back out!

The first recipe on my list was for modak, a cherubic dumpling with a characteristic pointy top, made of rice flour dough  and a moist, sweet coconut and jaggery filling.  What the recipe doesn't mention is that unless you  have non-stick fingers and the heat tolerance of a kiln brick, you end up with scalded fingers and extremely thick dumplings. And that's just the first few minutes of the Titanic at sea.

The second recipe was for puran poli, a flaky wholewheat roti with a filling of puran, which is a dal and jaggery paste. This recipe makes no mention of the fiddly filling leaking wetly through the roti, or of bits of unmashed dal hungry for publicity.

So to cut a long sob short, I was caught between looking like a compulsive failure or a compulsive liar, when bread came to the rescue.

I made modak shaped yeasted dough dumplings filled with a coarse puran, and baked them! Dignity saved, reputation saved, and compliments for innovation accepted gracefully as I quickly scraped the counter clean of all evidence of my earlier failures.


To make the dough, dissolve sugar into the milk and sprinkle yeast in. Leave covered until frothy.
Mix the flours and salt in a large bowl. Pour in the yeasty liquid, butter and egg and mix with a ladle.
Knead for about 5-10 minutes, until the dough is elastic and velvety. Plonk in a lightly oiled bowl, covered, until it doubles in volume. 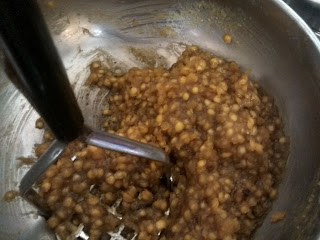 Meanwhile, start on the puran by melting butter in a saucepan. Throw in the remaining puran ingredients and stir frequently. Do remember to keep the heat low and to stir every couple of minutes. In about 10 minutes, the mixture will thicken. Turn off the heat and mash with a potato masher. As you can see, it's absolutely ok if you end up with a coarse paste (with the traditional puran poli, this would have amounted to culinary blasphemy).  Once it has cooled make 9 equal sized balls of the now pasty puran.

Lightly knead the dough and pinch off eight balls. Pick one up and flatten it into a flat disc on your palms. Stand a puran ball in the centre of the disc and cup your palm to shape the dough around the puran. With your other hand, pleat the sides of the disc and gather them to cover the top of the puran ball.  Twist the ends together to get the characteristic modak top. Repeat with the other 7 pieces of dough. Leave the dumplings, covered for around 30 minutes, until they rise again (the rise will not be dramatic this time). 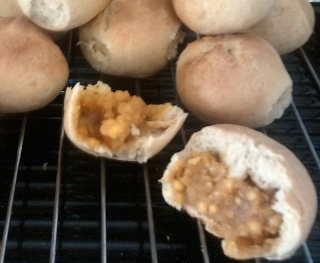 Cool on a rack and eat!

This week, I will put up easy recipes inspired by traditional Indian sweets.