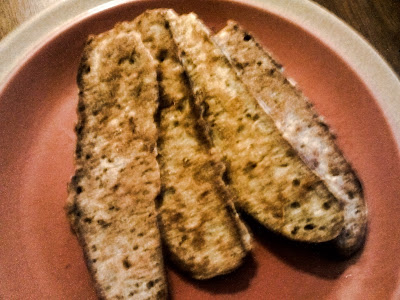 Nineteen years after the city of Bombay was renamed Mumbai, a snacky breakfast food named Bombay toast continues to be called just that.

Bombay toast must have set some kind of a record,with its claim to three untruths. Not bad for a two-word name huh?
It is not toast, it is not from Bombay/Mumbai (it's just another name for French toast), and it claims its rights to a city the name of which no longer exists!

But the fiction isn't what put me off Bombay toast. It was a spunky alternative that I tasted years ago in Bangalore. Made by a friend's mother, this unnamed food was spiced with turmeric and ginger garlic paste, and spiked with green chillies, garam masala and if if remember right, a bit of something sour, raw mango powder or lemon.

Here's my version of this dish, which I shall, as a tribute to the imaginative woman who inspired me to make it, call Bangalore toast :).

I use thinly sliced sourdough as a base,  which adds the right amount of sourness. But you could, if you're working with regular bread, use whatever sour ingredient you have at hand.

Oil for the griddle

Beat together all the ingredients (except the bread) in a shallow bowl until combined. The base of the bowl should be wide enough to accommodate a slice of bread. Alternatively, you could just cut the bread to fit the bowl.

Set the griddle on high heat, and grease lightly.

Place a slice of bread in the bowl, pressing it down with a spatula to encourage it to absorb the eggy mixture. Turn and do the same with the other side.

Lift the slice of bread carefully and set on the griddle. Turn down the heat and let the slice cook. Honestly, there's hardly any cooking to be done; what you're aiming for is a beautiful golden brown coating. Turn the slice when you get there and let the other side tan.