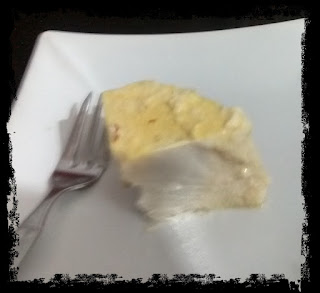 Do you know why I have a lousy, oddly sliced chunk of cheesecake in the picture, instead of a luscious, appetising, well-lit shot?

This was the last piece left, that's why. It was saved from the jaws of its rightful owner, for this picture! Yes, i know the blurry rough edges do nothing to compensate for the poor quality of the photograph, but its too late to take another snap. The last piece is gone!

So back to the cheesecake recipe, which took exactly 25 minutes from raw ingredients to set cheesecake. AND it involved shopping for only 2 ingredients! AND it's vegetarian!


Whisk the ingredients in a blender or with a ladle, and pour into a wet cake tin.

Steam for 15 to 20 minutes until the cheesecake is set.


This is a recipe for a plain cheesecake. In the poor excuse for the picture featured above :(,
I had added a pinch of grated nutmeg to the mix, and sprinkled saffron threads after the steaming was done.

Slivered nuts make a great topping too! These should ideally be added after steaming to preserve their crunchiness.

I guess pureed fruit that can hold its own when steamed might work too. I haven't tried it, would appreciate suggestions and ideas on other toppings.