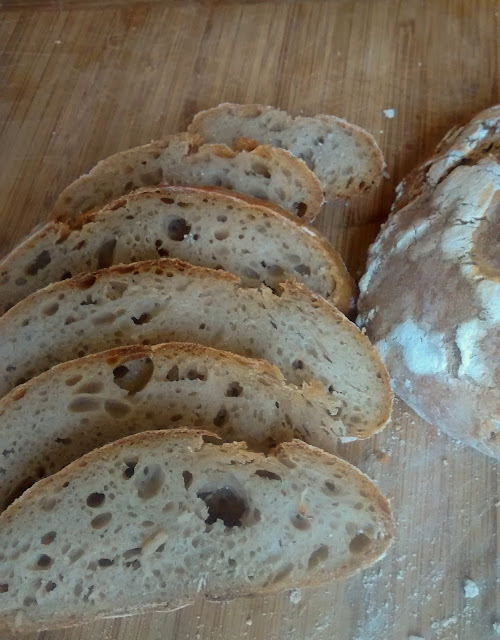 If there had to be a Hitchcock movie in bread, this would be it! For the entire duration of the process, I had no idea if I was going to end up with a lethal weapon or edible bread for dinner.

The ingredients seemed predictable enough - 150 g each of wheat flour and sorghum flour, 30 g of starter, 5 g of salt and 75% hydration.

The method was what I have used a hundred times before - a thorough knead, a long spell for bulk fermentation and another one after shaping. Into the oven for 10 minutes at 250•C with steam, and 35 minutes at 180•C.

In the first few hours, I kept going back to look for bubbles, a rise, anything to hint at life in the dough. But it kept as still as a crocodile waiting for prey.

I consoled myself that sourdoughs don't always double, etc. but by the end of the bulk fermentation, I would have been ecstatic about a measly 10%.

Things were no different after the shaping. The ball of dough lay sluggishly in its floured basket.

By now, it was too late to cook something else. I started telling my daughter of the joys of dunking bread. I also started warming up yesterday's leftovers.

The bread turned a nice warm brown after baking, and felt a bit spongy when I poked it. And I saw a tiny glimmer of light. But the size of the loaf didn't seem much bigger. And the glimmer now seemed like a laser beam of a hostile alien.

But as no wise man has ever said, proof of the bread is in the cutting.

And my sourdough turned out to have air pockets as big as the potholes in Pune. And there was a happy ending after all!