Rustic loaf with a triple dose of wheat 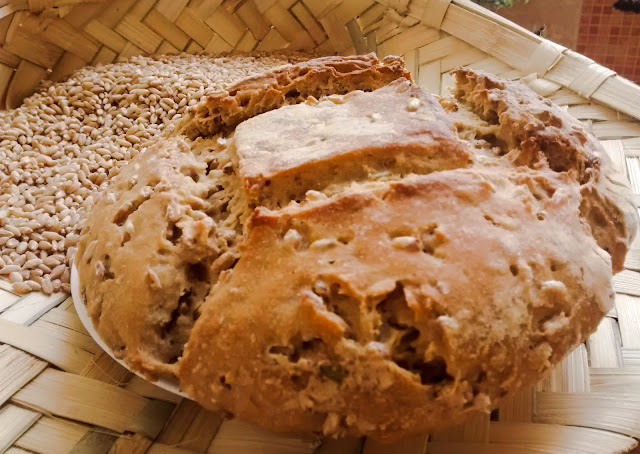 If multi-grain bread had to have an antonym, this loaf would make a good contender.
This experiment has been a pleasure from the start - right from watching wheat berries germinate, to the unusual texture of the dough to, of course, the tasting. Most of the proofing was done in the refrigerator, which may have contributed to the very mild, creamy taste of the bread.


I blended all the ingredients (except the salt and germinated wheat) and left them in a covered bowl.

After an hour, I mixed in the salt and kneaded the dough lightly in the bowl.

The covered bowl went into the refrigerator. When I took it out 12 hours later, there was a very very slight rise, but the texture of the dough was smoother.

I mixed in the wheat sprouts and left it on the counter for about 6 hours, lightly folding the dough on itself every hour or so.

I shaped it into a round loaf and put it back into the same bowl, now covered with a floured cloth. A cover went on and 6 hours later, it was ready for slashing and baking.


Love the taste and the texture of this loaf. There's a creaminess to the taste that I think comes from the long slow fermentation, but could it also be due to the wheat sprouts?

Was not entirely happy with the crumb. It was a bit too dense - need to try this recipe out with a higher proportion of regular flour and more kneading.

The wheat in the bread was yummy, can't say the same about the berries on the surface. They got a little too crunchy for my liking. Maybe I should mix them in at the start the next time. A little light steaming may also work, but I love the thought of all those living things in my dough!