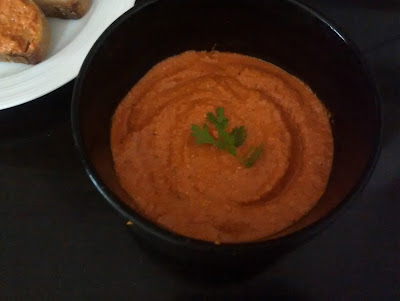 To anyone who points out that I can't call this dish a pesto, since it doesn't have pesto ingredients, I would say just one thing.

I'd say you're right.

The colour is wrong, the texture is nothing like the rich pine nut infused pesto glistening in oil, and what's that sacrilegious object on top, a coriander leaf?

Maybe outrage is a good thing, because it might distract you from the specks of pesto on the edge of the bowl and the er umm total lack of modesty.  Because I think this stuff should be the president of fake pesto republic!!!


2 red sweet peppers
1 large onion
2 tbs almonds
2 pods of garlic
Olive oil to taste (I poured in a good drizzle, and then took my time straightening the bottle)
Sea salt to taste
Grated lemon zest (this wasn't in the original recipe, but this it works to wake up the smokey aromas of the roast veggies like a hail storm on a beach)


Roast the peppers and the onion (skin on) on an open flame. I guess a grill would work as well.

When cool, skin the veggies and resist the temptation of eating them.

Chop roughly and blend in a mixer with the almonds and garlic. When pesto-ish in consistency, stir in salt and olive oil.

Disclaimer: The coriander leaf is in the garnish and not in the pesto. I would have loved to include its sharp aroma but it might have made the colour of the pesto a bit murky.


Creamy consistency that worked both with a slice of sourdough as well as with wholewheat pasta.

The taste was rounded and had a nice edge that came from roasting. I didn't miss parmesan, but I think the pesto would bloom with its addition.