Bread with mashed potatoes and sprouts 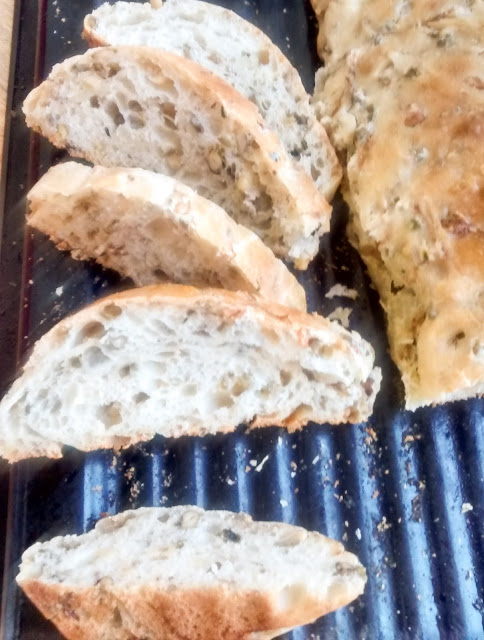 This was my first experiment with adding potatoes to bread.

It felt a bit like inviting a near-stranger to a family dinner, where you're worried about how the guest will get along with your family and vice versa, awkward silent spells, and an unpalatable evening at the end of it all that no one will ever let you forget.

So I did what one would do in the social set up - I invited familiar, trusted friends I could count on to ease any awkwardness. I added  sprouts, an egg,  good old butter and some milk. And they all got along brilliantly with the potato,  and we have edible dinner tonight :)

Step 1
3 g yeast
150 ml of lukewarm mixture of milk and water. (I used half the quantity of water and half of low fat milk)
5 g sugar


Mix the ingredients marked Step 1 in a large bowl. Cover and allow to rest until foamy.

Add the ingredients marked Step 2 to the bowl and mix with spoon until combined to end up with an extremely sticky and slack dough.

Lift and fold the dough, completing a full turn of the bowl. (I meant to put down a note on a really easy folding technique that I use, but discovered that it's not easy at all to explain without pictures. Shall post it next week). Repeat the lift and fold routine two more times over the next hour. 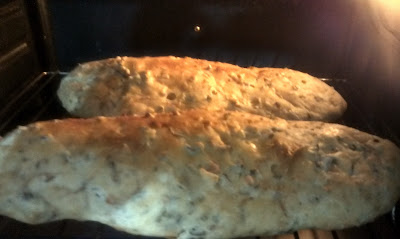 Set aside until the dough doubles in volume.

Tip onto a generously floured board and cut into two halves. Pat into two long flat rectangles, folding the edges of each rectangle underneath itself with well floured fingers. Arrange on a lightly oiled baking tray to rise.

Cool and slice. Alternatively, you could just slice it like a ciabatta, and make a panini. (that's what we did at home)